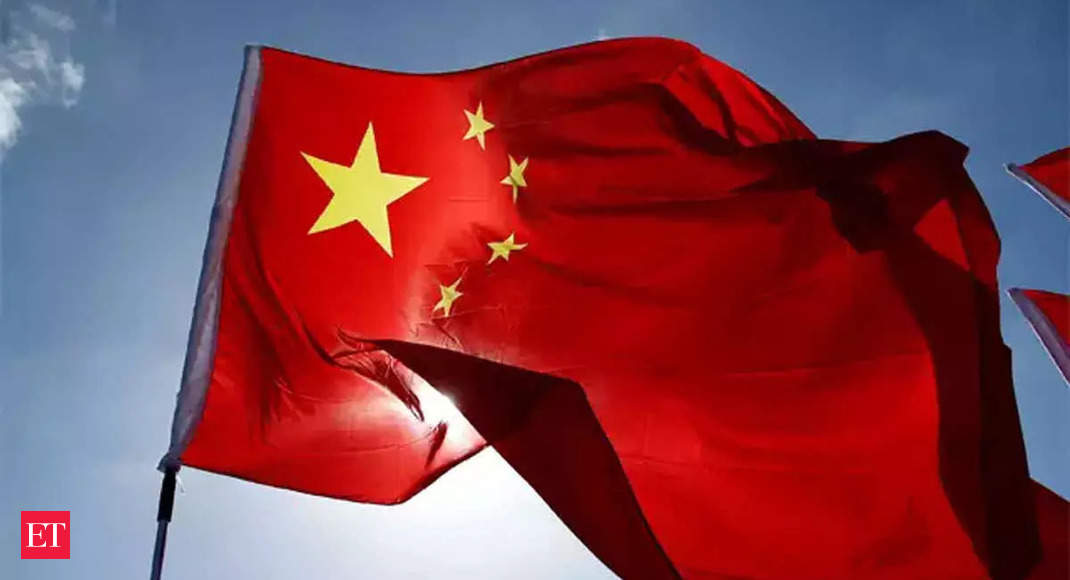 The country's Henan province has been for the past several weeks witnessing clashes between police and depositors with the latter saying they have been prevented from withdrawing their savings from banks since April this year. 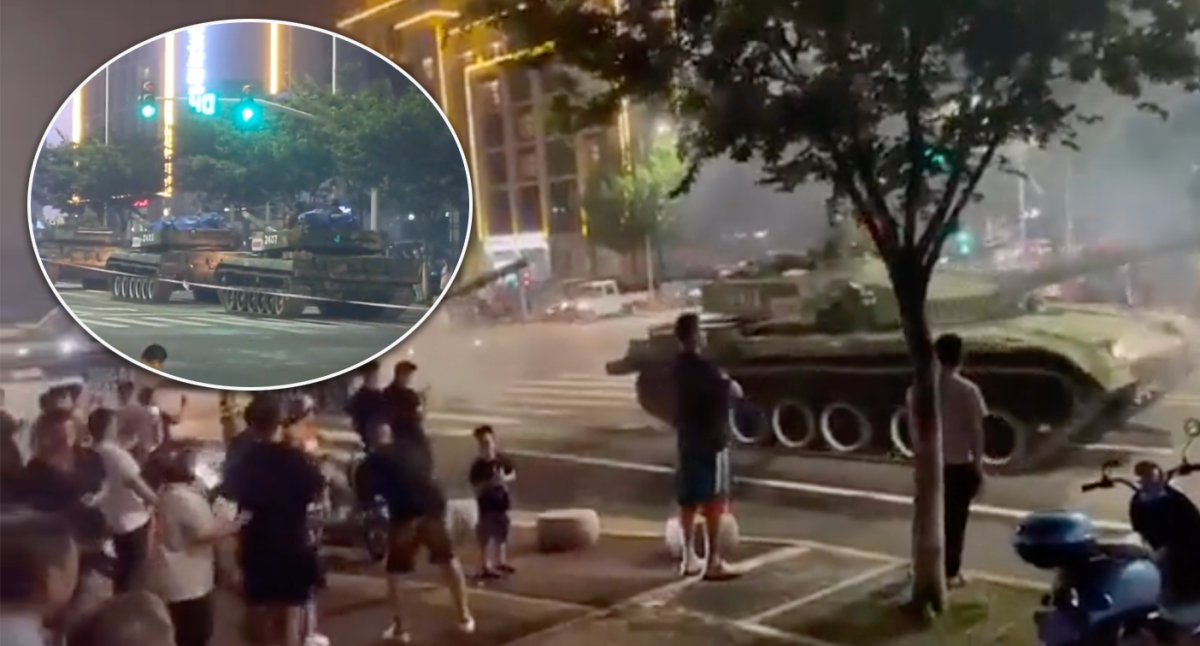 Social unrest is threatening to explode in China where people 'have bought properties that don’t exist yet'. Find out more.

Thank you for making my point that the Chinese system is rotten.

Show me another stable wannabe empire whose richest people don't even trust its own banks.

They go in droves to evil Australia and US
C 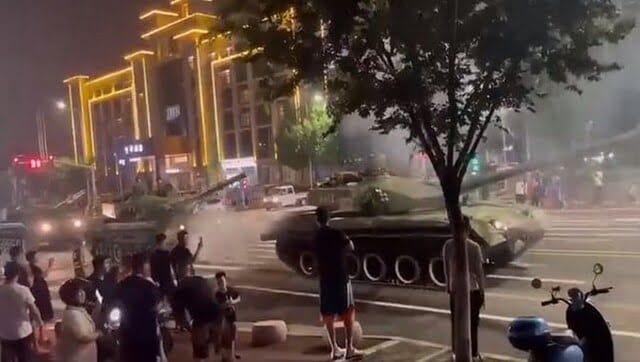 As per reports, tanks were rolled out to protect the banks and prevent locals from reaching them. This comes in the wake of an announcement by the Henan branch of the Bank of China that the savings of depositors in their branch are 'investment products' and cannot be withdrawn

Entrepreneur
The money in the bank was likely stolen by the Chinese Communist Party and used to build yet another organ harvesting facility to extract "natural resources" from Uyghur slaves in CCP concentration camps.

diatessaron said:
Euro is going down first.
Click to expand...

diatessaron said:
Euro is going down first.
Click to expand...

Such an odd comment. I don't see many tanks in Europe stopping people from protesting at banks.... Not an EU fan either, but let's not compare it to China.
3

Simon4466 said:
Such an odd comment. I don't see many tanks in Europe stopping people from protesting at banks.... Not an EU fan either, but let's not compare it to China.
Click to expand...

you are right EU even worse

Then immigrate to China and renounce your EU citizenship. Otherwise, you are simply a poser.
F

I am Indian, i dont know if this story is true or not.Run on banks - more negative news then ,more triggers for shorting.If it happens then good.We make some money on the downside.

Simon4466 said:
Such an odd comment. I don't see many tanks in Europe stopping people from protesting at banks.... Not an EU fan either, but let's not compare it to China.
Click to expand...

It will be too late when tank appears.
L

I rest assured the tank stuff has nothing to do with the bank crisis. The tanks in the video seem too old which I suppose are decommissioned. Active tanks in China don't look like that. It's just an irresponsive rumor, though the bank crisis is terrible.
F

linden said:
I rest assured the tank stuff has nothing to do with the bank crisis. The tanks in the video seem too old which I suppose are decommissioned. Active tanks in China don't look like that. It's just an irresponsive rumor, though the bank crisis is terrible.
Click to expand...

India did it with demonetization,China with tanks ,cyprus confiscated their people's wealth ,i wonder how long people will tolerate such things from the government's.They all need a good old thrashing especially the government servants in most countries.
3

fortunespeculator said:
India did it with demonetization,China with tanks ,cyprus confiscated their people's wealth ,i wonder how long people will tolerate such things from the government's.They all need a good old thrashing especially the government servants in most countries.
Click to expand...

and i ask myself when people start waking up realizing they are already in war against the so called "elite"
you open your eyes you see they start limiting/control every key point in peoples lives like food,water,energy,money,livingspace,medecine,privacy etc
Will achieve their long desired goal even without having a major war
F

369 said:
and i ask myself when people start waking up realizing they are already in war against the so called "elite"
you open your eyes you see they start limiting/control every key point in peoples lives like food,water,energy,money,livingspace,medecine,privacy etc
Will achieve their long desired goal even without having a major war
Click to expand...

Long live revolution!!!Each of us in OTC are revolutionaries in that way.
3

Entrepreneur
It is actually much worse than depicted in that video. Most people, unless they are astute observers of international economics, are completely deluded about China's economic potential. Here is an article that I read a few days ago. It aptly summarizes China's various intractable dilemmas:


If you’re still working on the assumption that China is a financial and economic juggernaut destined to pass the U.S. in total output and eventually rule the world, it’s time to put those ideas aside. None of that is true.

To begin, China is entering the greatest demographic collapse in the history of the world, worse than the Black Death of the 14th century and the Spanish flu of 1918. China’s current population is about 1.4 billion, but that number will decline to perhaps 800 million by the year 2090. That’s a loss of 600 million people.

If an economy is nothing more than the number of people working in it and the average productivity of those workers, then that demographic collapse by itself is enough to bring China to its knees. Still, there’s more.

The assertive communism of Xi Jinping is destroying whatever small traces of capitalism might have emerged in the decades since Deng Xiaoping’s reorientation of the Chinese economy in 1978.

China’s stock bubble is also bursting. That comes on top of China’s failed zero-COVID policy that is destroying growth in pursuit of an impossible goal of fighting COVID by locking down large cities on a seemingly random basis for extended periods of time.

International business is already moving quickly to move supply chains from China to Vietnam and elsewhere in South Asia. Once those supply chains move, they will not come back to China for at least 10 years if ever. These are permanent losses for the Chinese economy.

In a nutshell, China has serious structural economic problems and its internal contradictions that are finally catching up with it.

Will China be able to overcome these headwinds? Not easily, if at all.

“Chinese markets” is one of the great oxymorons. There are no markets in China. Everything is tightly regulated and manipulated (at best) or a complete fraud (at worst). For example, China puts up strong GDP numbers with occasional blips such as the 2020 pandemic or the 2008 global financial crisis.

But the investment component is thinly disguised government spending — many of the companies conducting investment in large infrastructure projects are backed directly or indirectly by the government through the banks.

This investment is debt-financed. China is so heavily indebted that it is now at the point where more debt does not produce growth. Adding additional debt today slows the economy and calls into question China’s ability to service its existing debt.

Up to half of China’s investment is a complete waste. It does produce jobs and utilize inputs like cement, steel, copper and glass. But the finished product, whether a city, train station or sports arena, is often a white elephant that will remain unused.

The Chinese landscape remains littered with “ghost cities” that have resulted from China’s wasted investment and flawed development model. What’s worse is that these white elephants are being financed with debt that can never be repaid.

And no allowance has been made for the maintenance that will be needed to keep these white elephants in usable form if demand does rise in the future, which is doubtful. If you subtracted the waste from the reported GDP, you’d find that actual GDP is more like 3% than the 6% China reports.

Essentially, China is on the horns of a dilemma with no good way out. It has driven growth with excessive credit, wasted infrastructure investment and Ponzi schemes, none of which is productive in the long run.

Most importantly, at under $12,000 per capita GDP, China is stuck squarely in the "middle-income trap" as defined by development economists.

The path from middle income to high income (about $20,000 per capita) is much more difficult and involves creation and deployment of high technology and manufacture of high value added goods.

Among developing economies (excluding oil producers), only Taiwan, Hong Kong, Singapore and South Korea have successfully made this transition since World War II. All other developing economies in Latin America, Africa, South Asia and the Middle East including giants such as Brazil and Turkey remain stuck in the middle-income ranks.

China remains reliant on assembly-style jobs and has shown no promise of breaking into the high-income ranks.

To escape the middle-income trap requires more than cheap labor and infrastructure investment. It requires applied technology to produce high value added products. This explains why China has always been so focused on stealing U.S. intellectual property.

China has not shown much capacity for developing high-technology on its own, but it has been quite effective at stealing such technology from trading partners and applying it through its own system of state-owned enterprises. But the U.S. and other countries have cracked down on China's technology theft and China cannot generate the needed technology through its own R&D.

In short, and despite enormous annual growth in the past 20 years, China remains fundamentally a poor country with limited ability to improve the well-being of its citizens much beyond what has already been achieved. And that has serious implications for China's leadership…

China's economy is not just about providing jobs, goods and services. It is about regime survival for a Chinese Communist Party that faces an existential crisis if it fails to deliver.

It will remain in power only so long as it provides jobs and a rising living standard for the Chinese people. The overriding imperative of the Chinese leadership is to avoid societal unrest.

If China's job machine seizes as parts of it did during the coronavirus outbreak, Beijing fears that popular unrest could emerge on a potentially much greater scale than the 1989 Tiananmen Square protests. This is an existential threat to Communist power.

President Xi Jinping could quickly lose what the Chinese call "the Mandate of Heaven."

That's a term that describes the intangible goodwill and popular support needed by emperors to rule China for the past 3,000 years. If the Mandate of Heaven is lost, a ruler can fall quickly.

The Chinese leadership knows this, but they’ve had to keep the growth machine in high gear to create jobs for millions of migrants coming from the countryside to the city and to maintain jobs for the millions more already in the cities.

Both alternatives are unacceptable to the Communists because they lack the political legitimacy to endure either unemployment or inflation. Either policy would cause social unrest and unleash revolutionary potential.

There’s more to the story, but that should be enough to convince any investor that China is one market to keep away from. If you’re invested in China, it’s a good idea to get out before it’s too late.

Why people are running after Online money?

To all the people who think barack obama is black