Where to move to avoid the next pandemic's restrictions?

One acquaintance considered herself "lucky" because she lived in a large apartment complex and could walk around the periphery of the building. By contrast, most people were always locked down inside.
Click to expand...

Wow,
Really unexpected. Don't know why but intuitively i tought it'll be more free there.
That a bummer.

What about
Croatia,
Montenegro, Czech republic and Serbia

Any one from one of these countries share info if they also took extreme covid measures?
S

Czech rep is on the same hype as Germany etc, our country closed schools for longest time in EU (I think was it 8 months), also came up with many extreme messures, unvaccinated people were labeled as enemies of society, bars/restaurants/gyms etc only allowed with covid pass to visit, really insane, but I think same as western Europe.

Approximately 1/3, maybe half of the country knows what's going on, the rest are total sheep.

In March 2020 they proclaimed the island of Murter was the centre of the epidemic and closed it off completely. By closed off I mean police patrol boats were going around the island 24/7. Clown world.

When vaccines arrived they were planning on going from home to home to vaccinate people. School teachers and medical workers lost their jobs because of the vax mandate. You could either take the vax or do a PCR or antigen test every 2 days. If you caught Covid your QR code only lasted 6 months.

There were also plans to make QRs mandatory to enter shopping centres, although that didn't happen in the end.

People were fined for 1000 euro just for leaving their house and staying in their own garden during isolation. However when summer (tourists) arrived Covid magically disappeared, until mid September when clown world restarted.

End of 2021 was the worst in my opinion. Thats when I bought a crossbow and several hundred rounds of darts. Because I would rather die/get killed than take the vaccine.

Conclusion: Croatia is OK but only during summer and ideally with a QR code if you can get one. Prices were around 500 euro for local residents but by the time I found someone restrictions were already being lifted.
J

opopopop said:
Any one from Panama can say how it went down over there domestic restrictions wise?
Click to expand...

Absolutely poopshow there.
Unless you live in the jungle somewhere out.
C

Welcome to Zanzibar guys, the autonomous Government just declared early on there was no Covid on the island. There was of course, but you face no restrictions and anyone can find something affordable.

backpacker said:
Indeed, that's Georgia:
Several months of total shut down. No public transportation at all. No individual traffic for several weeks. Not being allowed to leave your village. Mandatory waiting outside a hospital or dentist or polyclinic during winter time because is was "too dangerous" to let people wait in a room. Worst of all, they even sealed their borders and shut down civil aviation completely for several months.
Georgia did worse than Western European countries when it comes to restrictive COVID measures.

Nearby alternatives with a relaxed atmosphere (and people who do not care about silly government orders):
Tax situation for both countries depends on your individual situation.
Click to expand...

I agree about Armenia. No covid problems here

Silver Member
Mongolia.
Eastern Europe should also be safer than the rest of the world.
O

avalanche said:
I agree about Armenia. No covid problems here
Click to expand...

Thanks for the reply,
At this moment most of the world is relaxed
But how was it there in the past 2 winters? What was the mask requirements indoors / PCR tests to go into hospitals / curfews and lockdowns?


Lucas0511 said:
Welcome to Zanzibar guys, the autonomous Government just declared early on there was no Covid on the island. There was of course, but you face no restrictions and anyone can find something affordable.
Click to expand...

Was it like this in the past 2 winters as well?
B

opopopop said:
But how was it there in the past 2 winters?
Click to expand...

I a surprised: You say that you live in Georgia. The difference between Armenia and Georgia with regards to COVID has been widely discussed in regional media. Thee was even a diplomatic dispute between both countries in May/June 2020 because of this.

In short: In Armenia people did not care about COVID and most refused to get vaccinated.
There was a mask manadate but it was only lightly enforced. Nobody really cared about it.

Entrepreneur
The United States was like two different countries during the "pandemic." The liberal states had all the stupidity (masks, lockdowns, vaccine mandates, mandate firings) while the conservative states had none of that nonsense or quickly got rid of it (except for certain areas over which the federal government had control, such as airports). This dichotomy really contributed to the ongoing political and cultural splintering in the country between rational thinkers and the brainwashed sheep.

Almost everything that came out of the various federal health agencies was an overt lie. But the pandemic also showed the strength of a federalist system, where a central government has certain limited powers, while the state is the basic unit of political power. You had the option to move to another state to avoid the idiocy -- and many people did. A number of liberal states lost a Congressional seat in the last census.
Last edited: Jul 2, 2022
O

For real?
How did it go over there?


void said:
if country means government then yes - it's very convenient as an excuse for culminating economic collapse which is a result fiat currency systems


not sure about Bosnia but Mexico is perfectly fine and probably safer than most Western cities
I personally know three families with school aged children that moved to Albania because of restrictions - they have no serious complaints
money talks and choice of good area is important even in Western Europe or US
Click to expand...

But someone wrote that even until now there are masks requirements. Doesn't now we'll for the future

Any one know anything about Serbia and their actions during COVID times?

Entrepreneur
Panama's President Cortizo announced that effective July 11th, the mask mandate will end in Panama. Masks are not required to be worn outside or in closed spaces with the exception of buses, subways, and health facilities.

Restrictions… we were actually turned away at the grocery store at 9 o’clock at night when we went in to buy some bottled water for not wearing TWO masks. They would not accept us having only one mask, the government mandate is two masks. Everyone, at all times, inside or outside, even alone in their cars, is wearing masks. We even had to wear two masks when we took domestic flights inside the country on our journey to Cusco. This is now, like June 2022, when the world is opening up and people have a much better understanding of what is going on, in Peru, they are still forcing people to wear two masks. I am absolutely gobsmacked by this.
Click to expand...

Golden Fleece said:
Panama's President Cortizo announced that effective July 11th, the mask mandate will end in Panama. Masks are not required to be worn outside or in closed spaces with the exception of buses, subways, and health facilities.

I seriously cannot understand what the f happened there in Latin America. I always had the impression they are so chill and laid back but the last two years showed me otherwise.

JackAlabama said:
I seriously cannot understand what the f happened there in Latin America. I always had the impression they are so chill and laid back but the last two years showed me otherwise.
Click to expand...

The other problem was the media. In two countries that both had loose COVID restrictions, it unceasingly attacked Bolsonaro in Brazil, because he is a conservative, and it cheered Obrador, because he is a leftist.

Meanwhile, Bolsonaro legalized firearms in Brazil for the first time with the expected results (at least for any clear-thinking individual):

Homicide fell 34% after Bolsonaro made firearms permits easier and cheaper.​ 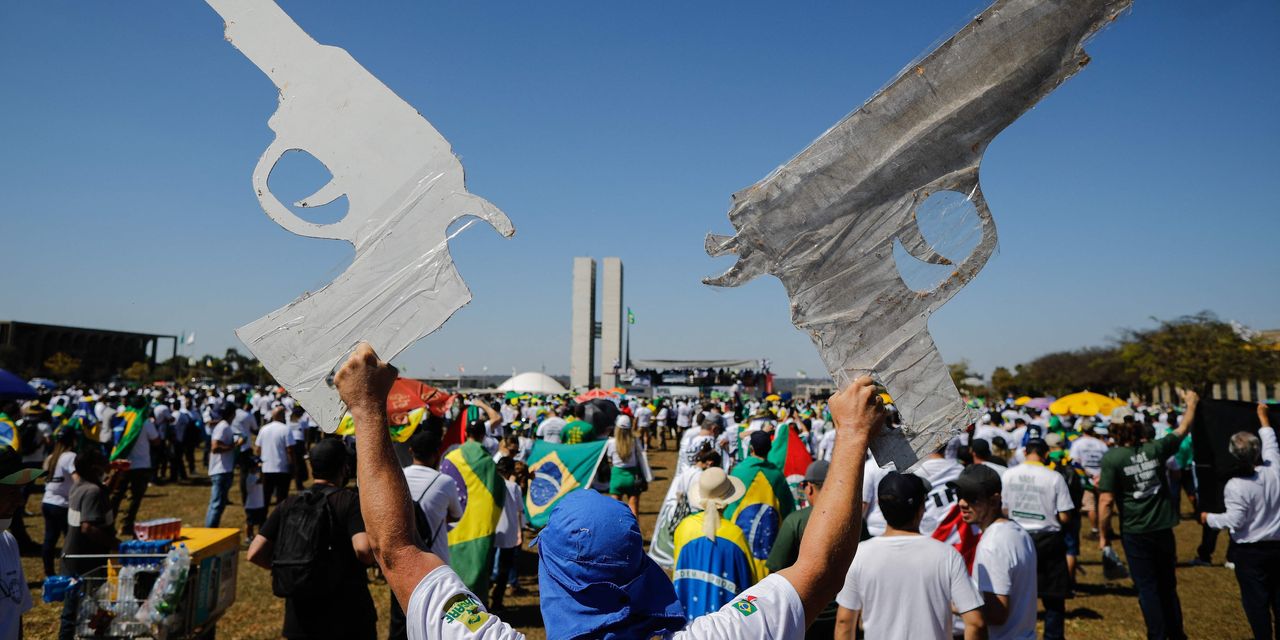 Homicide fell 34% after Bolsonaro made firearms permits easier and cheaper.

The liberal media was probably the second largest villain during COVID.
E

JackAlabama said:
I seriously cannot understand what the f happened there in Latin America. I always had the impression they are so chill and laid back but the last two years showed me otherwise.
Click to expand...

A history of right-wing dictatorship and lack of bad history with communism. Poor population that wants more help and control of the government, rather than freedom.

opopopop said:
I'm expecting that in the upcoming Autumn all previous covid restrictions will return and will be even harder and stricter.
Click to expand...

they will, governments will not give up before all "slaves" have been made poor. The world will go crazy.
Be part of the elite, be Mentor Group Gold

blizz said:
they will, governments will not give up before all "slaves" have been made poor. The world will go crazy.
Click to expand...

Anyone know anything about Serbia handling throughout the Covid time?
C

opopopop said:
Thanks for the reply,
At this moment most of the world is relaxed
But how was it there in the past 2 winters? What was the mask requirements indoors / PCR tests to go into hospitals / curfews and lockdowns?

Sure, with virtually nothing to export the island lives from tourism. And buying property is cheap, residence permit with $100k investment, i.e. FUMBA TOWN | The Future of Living in Zanzibar
N

I can recommend Serbia.

There were very few vax restrictions, mostly aimed at club nightlife.
Even at the start, when there were restrictions like no dining inside, people would still let you in and say "if someone asks, you're friends of the owner, not customers.". Police didn't care.
Overall Serbians are great people. Belgrade is a fun city with a great expat community.
J

Jan 2, 2022
BlueMist
B
N
Question Where to get covid-19 vaccine certification without taking the vaccine? (in EUROPE)
2 3

Corona Virus - COVID 19 - the beginning of the next financial crash?

Is she afraid to infect the sharks with COVID-19?