I have the feeling that the bitcoin value is collasping

extremedox101 said:
historically the us army is somehow brave and fight in battles , also many who join it are immigrants who desperately wish to get us passport
Click to expand...

I have never met a brave US solider just US people from disadvantaged backgrounds who join the military to get good healthcare, colleague opportunities etc. Yes many immigrants join as a way to gain access to the American dream and I don't hold that against them as its their means to an end. However I won't describe them as brave. Bravery goes with justification for an action. Most US soliders go home mentally screwed after battle and don't even know why they are fighting a harden enemy in the first place. There is high suicide rates, poverty and homelessness among US soliders who have finished their tours btw.

I don't think people understand the history of the Afghan people. They have fighting in their DNA. Their mentality and motivation is different. They have been fighting the US for over 18 years and would fight until eternity. Thats what happens when one is fighting to defend their land.

People talk about Taliban like they are not one and the same as Afghan people. The Taliban are the Afghan people and are defending their land against an invading force. When Nazi Germany invaded France, Netherlands etc there was resistance forces of locals who took up arms against them i.e French Resistance and Dutch Resistance and in pretty much every other invaded country. Same with IRA trying to kick British out of Ireland.

If the US had any brain cells they would have researched history or at least gone to wikipedia...lol and seen the history of failed invasions of Afghanistan going back to 1838. The Afghan terrain and the fierceness of the people make it unconquerable. If they wanted to be successful in Afghanistan in the first place they should have done what they did 18 years later.....talk to the enemy.

P.S Anyway lets get back to bitcoin talk

Martin Everson said:
So you asked the below question and I responded to it with "You wouldn't need to". Do you find any middlemen companies openly willing to break US sanctions on Iran anywhere on planet earth? Same logic applies as no Mpesa or Alipay CEO of these "middlemen systems" wants to end up fined, business closed down or put in jail. They will implement draconian measures. It won't stop a determined person as nothing will but the punishment dished out if caught will serve as a hindrance.
Click to expand...

I think you have wrong information, almost all large banks are fined again and again for breaking EU/US sanctions. Even US banks like Wells Fargo, JP Morgan, Bank of America, from payment systems for example PayPal.

LouisB said:
I think you have wrong information, almost all large banks are fined again and again for breaking EU/US sanctions. Even US banks like Wells Fargo, JP Morgan, Bank of America, from payment systems for example PayPal.
Click to expand...

Yes they can be fined like I already said. But whats your point...lol? .
L

Martin Everson said:
Yes they can be fined like I already said. But whats your point...lol? .
Click to expand...

LouisB said:
the point is that there will be always banks that will handle BTC even if there is a ban (the same is valid for payment systems)
Click to expand...

Ok I see where your going. Yes banks will always break the law even if banned from doing something. You just need to be a too big to fail bank like the ones you mentioned and you will just get fined heavily. Be a small bank like Satabank, FBME, Pilatus Bank etc and your out of business.

Good luck to any bank or EMI that wants to not follow US rules....lol. Speak to Loyal Bank CEO for example.

It is only four days to halving of block reward. Bitcoin is collapsing, upwards
Besides the above, the reason for today's strong move is this:

Paul Tudor Jones Buys Bitcoin as a Hedge Against Inflation
Click to expand...

Normally it would not matter much, but Paul Tudor Jones is one of the heavyweights.

Staff member
Elite Member
Oops, I just saw this post, probably should have seen it before making a new thread with my question about whether we think btc reaches 15K by Sunday

|| !! My Private List of Trusted Service Providers !!
The Ultimate Guide to setup a High Risk Business for the Elite, only for Mentor Group Gold Members!​
M

I think it is time to be careful. Maybe it is related to the coronavirus. I don't understand what is going on. Some people say that it is a normal trend. I don't believe it.
Click to expand...

I don't think that bitcoin will collapse. It is showing a bullish trend

OTR365 said:
Besides the above, the reason for today's strong move is this:
Bloomberg article.
Normally it would not matter much, but Paul Tudor Jones is one of the heavyweights.
Click to expand...

I really don't like these sensationalistic headlines...
As far as I know, he didn't buy any Bitcoin, possibly his fund bought some Bitcoin futures, i.e. derivatives which in general can actually be a bad thing for non-custodial approach to cryptocurrencies. OTR365 said:
It is only four days to halving of block reward. Bitcoin is collapsing, upwards
Besides the above, the reason for today's strong move is this:
Bloomberg article.

Normally it would not matter much, but Paul Tudor Jones is one of the heavyweights.
Click to expand...

In the long term, I don't think this is important because people who maintain big chunk of money are already in. For FOMO are this kind of articles good, but it is due to the fact that too many people follow nonsense news and act according to them. Most important news of recent months is - Bitcoin is still here and alive after the main shock in the economy for decades, this is something that will bring many new eyes to Bitcoin in coming months and years in my opinion

KJK said:
As far as I know, he didn't buy any Bitcoin, possibly his fund bought some Bitcoin futures, i.e. derivatives which in general can actually be a bad thing for non-custodial approach to cryptocurrencies.
Click to expand...

Futures trading and leverage in general is not necessarily good for bitcoin, but it is inevitable given the way things have developed. There's just nothing to do but accept "they're here".

Hedge funds have legal obligations - trading via futures instead of taking custody of coins, makes sense to them on many levels. Futures positions have often spillover effects in the spot market. In this case particularly, I find it likely PTJ's counterpart was a large market actor buying spot, selling futures.


LouisB said:
...people who maintain big chunk of money are already in. For FOMO are this kind of articles good, but it is due to the fact that too many people follow nonsense news and act according to them.
Click to expand...

Sure, "Buy rumors, sell news" is an old truth. My biggest worry recently has been that so many bigg-ish names are ultra bullish on bitcoin. Bitcoin makes logical/intellectual sense in this economic situation, but if they are bullish, they are already in, as you said.

This PTJ thing is remarkable in that he is the first big hedge fund guy in bitcoin. It could be a weak signal that large funds are moving into bitcoin space. Also, PTJ's estimate that bitcoin is the fastest horse in inflationary race, makes a lot of sense. For example gold market is much more restricted due to huge central bank participation.
L

as usual in trading of everything, only question left, if the pump will go higher and I bet so. When I close my eyes I can see a wonderful world, where most traditional assets bear negative yields. You will take a loan and in the end, you pay less than the principal. You will take a mortgage and immediately you will feel happy as your debt is eaten through negative rates. This party will not end anytime soon until there are people who don't have debt now and will be forced to take loans in this new wonderful world. The party will end once there is no one who would take new loans, but who knows, maybe we will figure out how to create unlimited new loans for any crazy idea that you may think. And then, I open my eyes and I'm glad that part of my portfolio is in Bitcoin and any higher pump on Bitcoin have much more probability than yields on US long term bonds will keep above zero

Staff member
Mentor Group Gold
Elite Member
Is this classic pump and dump over now or are the whales going for a last minute second round before halving...lol?
L

Martin Everson said:
Is this classic pump and dump over now or are the whales going for a last minute second round before halving...lol?
Click to expand...

That's a good question, I guess you should expand your thoughts and then we can add some answers. In my point of view, this is some small insignificant event and I would like to see the whole situation after 4-8 years. I expect we will see the six-digit value of BTC not due to retail, but because the big boy will take us there
S

Collapse ...? Lol ... If history repeats itself, and generally does, the next few months will be really interesting. 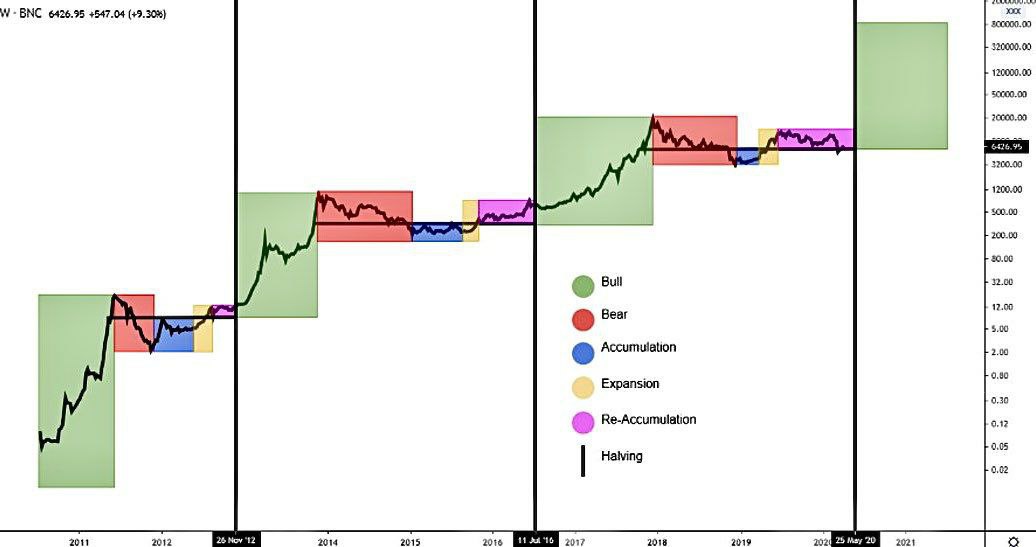 Entrepreneur
Yeah, guys, BTW the wallet Craig claims he owns just signed a message calling Craig fraud. LMAO, will be interesting to see him weasel his way out of this one.
E

Skianto said:
Collapse ...? Lol ... If history repeats itself, and generally does, the next few months will be really interesting. View attachment 1471
Click to expand...

Bitcoin has huge potential duo to unconfiscateable nature and censorship resistance (no other asset has this), but we won't have another 2017 as normies have gotten burned and its still fresh in their memory. Just like we didn't have as second dot-com bubble or second beanie baby bubble, so I think waiting for "moon" is kind of naive. Things like these work ONCE.... ONCE
W

Up what 4% since you posted this,

Bitcoin is more stable and gaining more momentum than pretty much anything else in 2020.

Thought I was a genius. Thought is was collapsing. Actually...it did. And it came back 20x stronger.

2017 was not even close to bitcoin's biggest dump and it has never had more support than it does right now. Could it lose half its value tommorrow? Yes. But at this point I think traditional financial markets have better odds of doing that.
You must log in or register to reply here.
Share:
Facebook Twitter Reddit Pinterest Tumblr WhatsApp Email Share Link