i saw advertising in this forum (paid advertising)
and decided to open account with them, they offered POLISH account ready to use (corporate) for about 6k euro
i offered it to my customer and bought it for him, everything was smooth so far..
my customer got 2 wires to the account , about 12-15k euro in total.
few days after.. he found out that someone changed the sms phone number to another number, he couldn't make any transfer from there, (because the otp code sent to another telephone)
i shared it with @companix and he said he will check it , it was beginning of august 2020
he said he will check with the lawyer how to solve it...and said that my money is safe, "nothing to worry about"
2 weeks after we find out that: the owner of this account changed the "Security " of the account to use sms token too (theres option in the onlinebanking there to enable/disable it)
(i guess so we will not be able to see the balance anymore)
i explained it to @companix again, and he said will check.. until now the problem is not solved at all
and he said that must be "IT PROBLEM" of the bank
if it was real IT problem like he explained, the bank will not solve it? ofc they are!
i have the original papers of the owner who sign in the account and i can see the phone number that he gave me,
its enough to prove the bank that "there's issue"

current situation : he is ignoring of my messages, answering in short " who need your 10k" , " there's covid19, cannot solve it now"

i let you guys decide if its SCAM or not .

Mentor Group Gold
I want to shield companix a bit. As I know how devastating it is to get a bad review in the forum. (however my bad review was because of an illegal business activity gone wrong and funds have been seized by authorities. Not because of a rogue nominee)

As far as I know companix is providing companies without any need of verification and without handing out legal documents about the real ownership.
So you probably got the bank account etc. without providing any passports and without getting any legal documents, right? Then you should have known that this could happen one day and you don't have any legal attack points to get the company and account back.
So I also assume your clients were doing business which needed a fully anonymous setup like this. And therefore some risks come with it.

And also take into account, that i assume that companix won't scam for just 6k + 15k. So it's a case of a poor nominee taking the money and run and this risk should have been taken into account before. So in my opinion it wasn't a scam directly by companix, just a business gone wrong where all sites should have known the risks.

Chances you have: Suing the company for not providing the service which was invoiced and taking the nominee to court.

Next time ask for legal documents to support you/your clients to be the UBO. Then you would be able to recover the funds for 90%. Takes time and money but the chances are very good. Maybe it won't be economic for just 15k, though.

PS: Don't know if he uses darks or not. With darks you may be f***ed. Using darks is never recommended unless you engage in illegal activities.
Nominee Structures are not working anymore. Get a Professionally Managed Offshore Structure | neweraoffshore.com | READ THE FULL PAGE BEFORE CONTACTING ME. DON'T CONTACT ME IF YOUR BUSINESS IS ILLEGAL! | Password on request

Mentor Group Gold
still the one that take the money is responsible for the entire deal and whatever will happen.

I'm so happy that I looked for reviews and found strange things on them in the mentor group, I avoided my order with them.
A

hello,
i have no problem to provide any kind of documents! he is the one who offered it as is.
offshore hosting services is dark? i don't think so.
at the end @companix promised alot of things such " lawyer will solve it " and what i got "kind of ignoring"
and he said" we speacialy puting 2 directors from different countries to directors not to steal money"
at the end, we lost access to the account, and i guess also lost the money there.
i agree that it doesnt worth to do that for 15k , but when i searched for the person who signed in the bank guess what?
alot of companies appears , so maybe there's some "cleaning day" for companies once a while.
how they know that i have balance in the account days after? no notifcations for that by email, and sms was configured to the provided sim card..
guess what, day after i told him that i have funds in the account.. someone toke control on the account, see how's everything "started"
and judge by your self. i really hope that im not right. 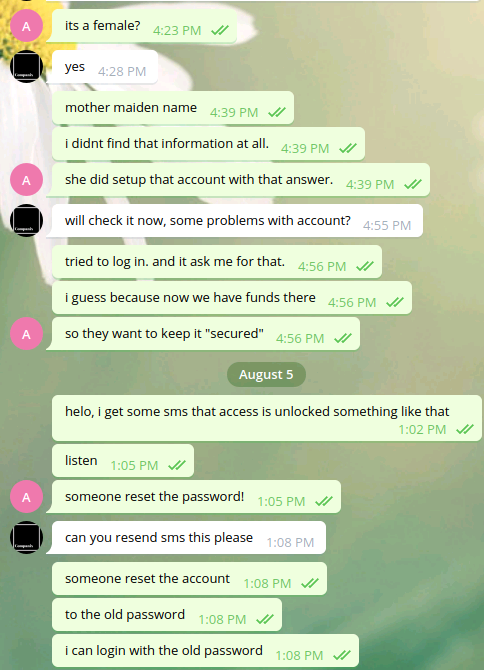 from this day , everything stopped working, sms number was changed to another number. 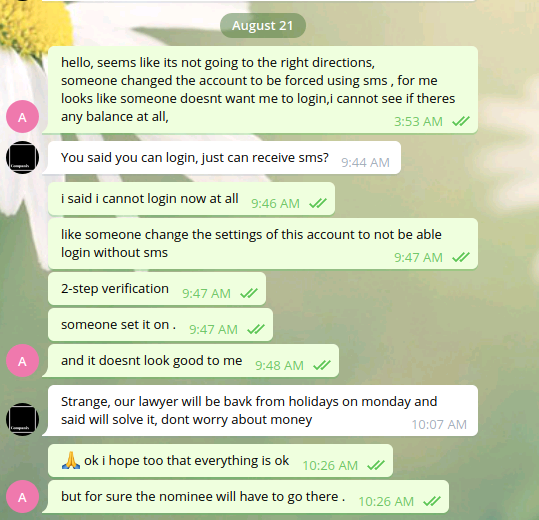 as you see here i was waiting until august 21 and he said "lawyer will back from vacation"
i was stupid to think that the nominee will go there to recover the money,
i will not be surprise if the nominee was there to take out the money.

today is : 08 October 2020 , few months passed and the "lawyer" didn't do anything,
or maybe he is still on vacation.

situation right now by the way: 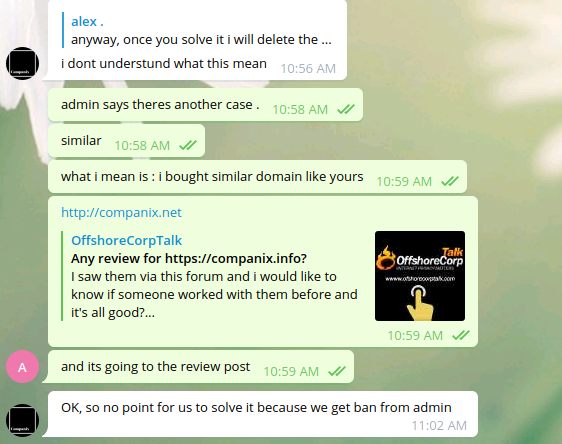 i really bought a domain like his domain and point to the posts here so if someone will google his name he will see the results.
i really hope that i'm wrong and this guy is honest person like you say, at the end its total lose of 20k euro including the account +company cost.

by the way, i told him, prove to me that i'm wrong and i will publish apologies for that,
but so far you see how its ended the conversation with him.

at the end , if i help to prevent any kind of scam then i'm happy with it.
at least something good came with it.
Last edited: Oct 8, 2020

Staff member
I'm very sorry to read all this, today we have banned the user, he is not part of this community any longer nor do we want him here.
SPONSORED LINK: Offshore Company Formation Services - Turner Little

Mentor Group Gold
Ok, hmmm. The "won't solve it because banned anyway" is of course not nice and not professional.
He should at least give you back the money for the setup.
Anyway, good luck! Next time look to have some legal attack points like a carte blance company purchase agreement with the clause which states that 3 months prior of the closing it is not allowed to take out money etc. And meet with the provider in person. Good providers don't have to fear to be met in person (for legal businesses only, of course).
Nominee Structures are not working anymore. Get a Professionally Managed Offshore Structure | neweraoffshore.com | READ THE FULL PAGE BEFORE CONTACTING ME. DON'T CONTACT ME IF YOUR BUSINESS IS ILLEGAL! | Password on request
A

@neweraoffshore
yes i agree with you, will learn from it.
C

BANNED MEMBER
There is no argument regarding the change of the number. You have to log in to do so. Therefore if you change contact details by saying you have lost access to the phone is a clear indication of theft.

No question about it and the seller is responsible not the buyer. The business is built on trust and there is every opportunity for providers to steal clients funds. It's a shame that it has come to this but he definitely spoke with the nominee and his silence tells you his intentions.
You must log in or register to reply here.
Share:
Facebook Twitter Reddit Pinterest Tumblr WhatsApp Email Share Link

!!WARNING!! templates.com is a HUGE SCAM