Any good setups in Switzerland?

Entrepreneur
I recently received an attractive offer for a project in Switzerland. But it would require giving up my nomad lifestyle for a few years at at least and moving there.
As I would have to rent an apartment where I would need to show proof of high income, I guess it would be difficult to save taxes. Buying an apartment would probably require more capital than I have, and even if I did have the money, I would still be a Swiss tax resident with all the negative consequences.

But maybe there are still some good setups in Switzerland? After all, Switzerland at least doesn’t have any CFC rules.
One other option I can think of would be to keep as much cash in the company as possible, paying only corporate income tax (which would be about 14% in the area if I remember correctly). And then, in a few years (when the project is finished), to move to Estonia to cash out tax free.

But I guess between the maintenance costs for a Swiss company with accountants and lawyers, housing and other expenses, I’m not sure if it would be worth it. So I’m leaning towards declining the offer. But I’d like to at least know what I’m saying no to.
So if anyone has some insight, please share it.

I think @clemens , @marzio and @Admin might have some input?
M

Mentor Group Gold
I'll have to remember you that the very best deal in the world is to register a Swiss branch of a foreign company.

From this point of view with £200 a year for a UK LTD and CHF1000 for the Swiss branch you are done with the company formation costs.

Instead of a UK LTD you could use an Estonian OU.

Which canton are you going to relocate to?

Mentor Group Gold
You can find a lot of threads about Swiss setups here:

I just came across with an article saying that in this canton of Switzerland (Nidwalden), the corporation tax would be 10%. Is it too good to be true? I always get confused with Switzerland laws (federal tax, different rules in each region, no tax in non-resident companies?)...

Hello, I have been made aware of this Switzerland mantelgesellschaft from a nice forum member which also provided links to some providers of the same! What I'm looking at is to buy some cheap ready-made / mantelgesellschaft in Switzerland, I think a GmbH is cheaper than a AG and the legal...

Maybe the most interesting for you:

Registered office in Switzerland / Zug does this work for company?

Does someone know if this Geschäftsadresse und flexibler Arbeitsplatz im Lakeside Business Center Zug can be used for providing a valid address for company formation in Switzerland? It's very cheap compared to the many other offers I have read! My plan is to register my Swiss AG on the...

marzio said:
From this point of view with £200 a year for a UK LTD and CHF1000 for the Swiss branch you are done with the company formation costs.
Click to expand...

Yes, sure, you can register a Swiss branch, then you save a bit on the company formation costs. But you will still be paying the same taxes and accounting fees.
Last edited: Sep 15, 2020
J

lory said:
You can find a lot of threads about Swiss setups here:
Click to expand...

They are all about corporate income tax, no?
As mentioned, CIT would be something around 14%, not really worth any gymnastics to get it down to 11%.

The big question is how to have a personal income that would be high enough to be able to find a nice apartment, while at the same time not paying 30-40% in total taxes.
Of course, I guess I could pay myself a high salary for 3 months, rent an apartment and then slash my own salary. But maybe there are better setups?
Could it make sense to use a foundation or something similar?
M

JustAnotherNomad said:
The big question is how to have a personal income that would be high enough to be able to find a nice apartment, while at the same time not paying 30-40% in total taxes.
Click to expand... 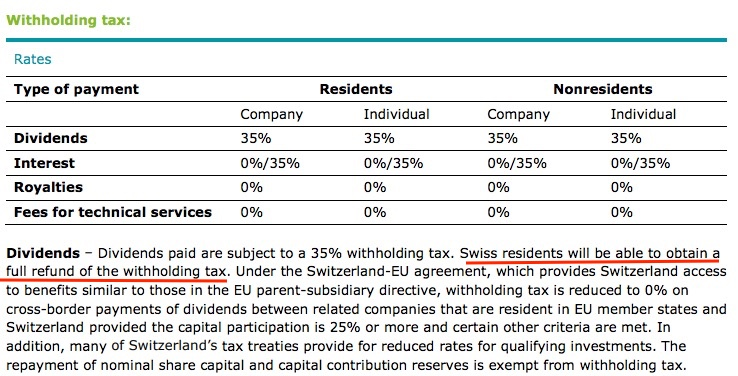 Entrepreneur
Yes...? Of course there won’t be any withholding tax on dividends paid from a Swiss entity to a Swiss resident individual. Instead, you pay personal income tax.
M

Mentor Group Gold
You pay personal income tax on salary, not on dividends (which are already taxed at 35% and then refunded if declared)
J

Entrepreneur
That would be great, since that would put Switzerland in the same category as Estonia or Portugal’s NHR. Unfortunately, that is not the case:

“Dividends and interest from domestic and foreign sources are included in taxable income for the purposes of federal, cantonal, and municipal taxes.” 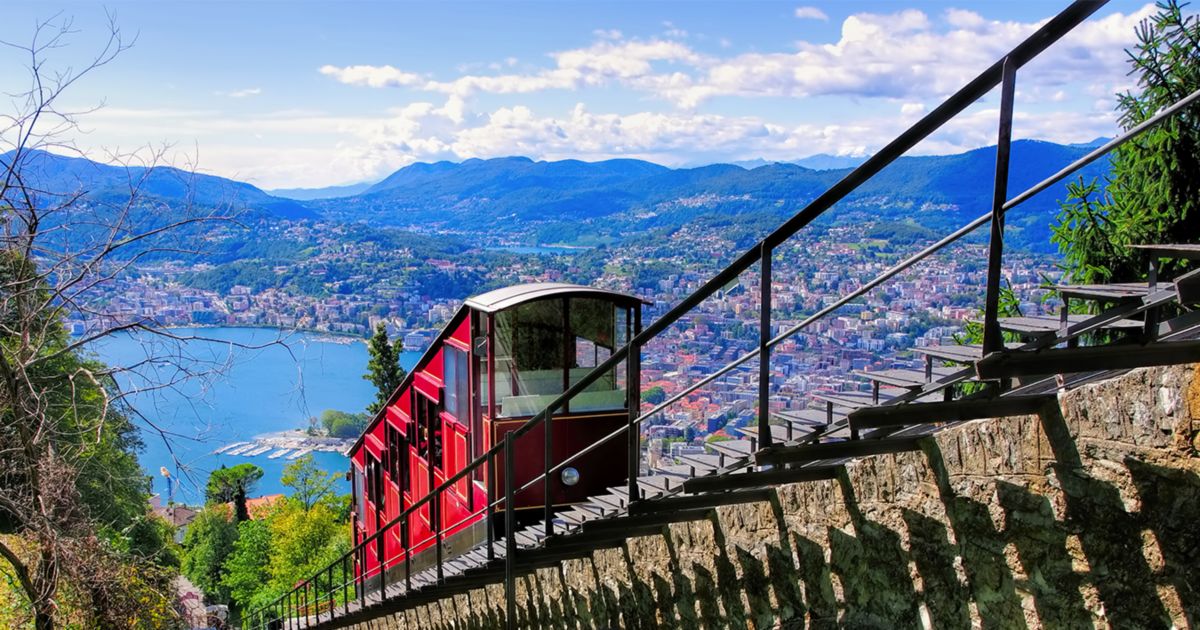 Mentor Group Gold
In the same phrase you quoted "Swiss-sourced investment income, such as bank and bond interest, dividends, and investment fund distributions, is generally subject to a 35 percent withholding tax, which is creditable in full against Swiss (federal, cantonal, and municipal) tax on income and wealth due from a Swiss resident."

I never heard a country where they tax you on dividends and then tax you again on personal income.
J

By the way, that’s what the USA does as well - 30% withholding tax on all dividends, unless a lower rate is specified in a tax treaty. Many/most countries levy withholding taxes. Only within the EU/EEA, I believe withholding taxes are illegal if the recipient is an EU/EEA tax resident.

That’s exactly what is happening here: You pay your personal Swiss income tax on the dividends you receive and then you can get a refund for the withholding tax, since you’ve paid your personal income tax instead. Otherwise you would be paying tax twice on the same income.

“Dividend income derived from investments is taxed at the ordinary rates together with the other income. In general, dividends from Swiss sources are subject to a 35% WHT that can be credited against the Swiss income tax liability, if such dividend income is declared correctly and in full.”

BANNED MEMBER
Unfortunately in Switzerland the gymnastics are not worth it. I bought a Trust with grandfather rights for a project thinking that it would help.
They got me on WHT and it wasn't worth it to try and negate it. Bad thing about Switzerland is its damn expensive so even trying to expense as much as you can, won't help.

You could contract it out if possible as an Estonian company and pay the 20% tax therefore savings you 15%. Or if you have a company registered elsewhere then you could try and do it on a consultancy basis and a portion of the profit pay tax on a salary received as if you are on a secondment.

The basis for this is already set as you don't currently live in Switzerland.

Best to get legal opinion around this but I'm sure that could work. @Tax Cow and @Martin Everson should be able to give you an idea.
M

JustAnotherNomad said:
You pay your personal Swiss income tax on the dividends you receive and then you can get a refund for the withholding tax, since you’ve paid your personal income tax instead. Otherwise you would be paying tax twice on the same income.
Click to expand...

If that's the case i spoke with somebody who doesn't have a clue because he said to me that there are no taxes on dividends in Swiss.
J

marzio said:
If that's the case i spoke with somebody who doesn't have a clue because he said to me that there are no taxes on dividends in Swiss.
Click to expand...

Probably. At least that’s how I understand it - and it also wouldn’t make much sense because then everybody would just be living off dividends and not paying a salary.

However, it seems like there are indeed no taxes on capital gains from selling shares, maybe he was confusing that with dividend income?

I mean, it’s not terrible. I could probably get away with paying about 15-20% in total taxes. But I still think I’m not going to do it, considering how expensive Switzerland is otherwise (and I’d also like to keep my nomadic lifestyle).
M

JustAnotherNomad said:
maybe he was confusing that with dividend income?
Click to expand...


JustAnotherNomad said:
still think I’m not going to do it
Click to expand...

It all depends on the type of offer you received and running the numbers of costs vs benefits. Switzerland indeed is a very expensive country but it also has a super high quality of life. For some people relatively low taxes, privacy, safety and being in the center of EU is worth the price.

Mentor Group Gold
Is it possible to setup a calculation for someone that earn 5000 EUR / month or 5000 CHF / Month. Living in Zug or living in Lugano (both have been mentioned here on the forum a number of times).

You rent a flat / house somewhere and live your live, how much would I get out of the 5000 CHF at the end of the month, if you consider all costs, insurance, tax etc, do you know that?
J

Entrepreneur
Just google it. There are official tax calculators. Insurance probably depends on your age. I would expect about 15-20% in taxes.
But 5k probably won’t get you far in Switzerland.
M

JustAnotherNomad said:
5k probably won’t get you far in Switzerland
Click to expand...

Rent could be as low as CHF820/month

Then there's private insurance around CHF280/month

If you buy food in the near Italian border your total expenses could go down even further.
J

Entrepreneur
I don’t doubt you could survive on a 5k budget. It’s not Monaco. But you would by no means be rich. You would be living a very modest life. After your fixed expenses, you might have 2.5k left (at least that’s what my own research has shown). Which is ok, but we’re talking about a modest lifestyle. In other countries, you could live like a king on a 5k budget.
In bigger cities, some people making 5k a month don’t even have an apartment of their own. They still share an apartment with other people to lower their expenses.
Of course the upside is that it’s quite easy to earn much more than 5k in Switzerland.
M

Mentor Group Gold
The problem is that your goal isn't clear (at least to me).

Do you need to be physically present in Swiss?

If yes which canton?

Are you going to get hired by a Swiss company?

Do you have to open a company in Swiss?